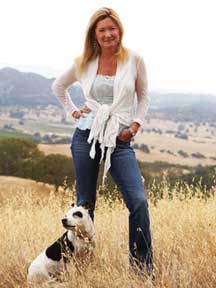 Brigit Binns lives and works in the wine country of Central California, thirty minutes from the Pacific and equidistant between Los Angeles and San Francisco. She has been lucky enough to turn her passion for food and the great outdoors into a career: Brigit is the author or co-author of twenty-nine cookbooks and editor of many more. Along with her husband actor Casey Biggs (aka “Paso Wine Man“), she owns and runs the stunning culinary learning center and vacation rental retreat, Refugio Paso Robles.

Publishers Weekly said, of Binns’ most recent book: “Eating Up the West Coast: The best road trips, recipes, and restaurants from California to Washington”:

celebrates the food and winemakers of California’s fastest-growing wine region: “Paso Robles is a region full of mavericks and innovators. Utterly unpretentious, it’s the sort of place where people from other regions in California gravitate when they find themselves tired of the too-slick, too-pricey scenes in neighboring wine regions. French wine nobility cultivate vineyards next to fourth-generation cowboys, and for every sleek new wine bar, there’s a cowboy saloon with moose heads hung on the walls.”– Justluxe.com

The Huffington Post called her opinionated drive-eat-think blog Roadfoodie one of the “Best Food and Drink Websites.” 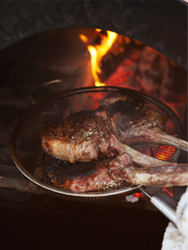 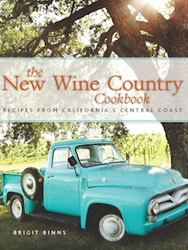 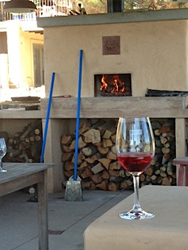 Brigit’s California wine-country pizzas make a big splash in the July issue of Wine Enthusiast, with a 12-page spread including plenty of luscious photographs and great recipes. Check out the stop-action video of her Calamari and Chorizo pizza here. Deliciously unconventional, of course.

The recipes reflect this feeling of blending the old and the new. They are made with fresh ingredients local to the Central Coast (which, admittedly, could fill a Whole Foods) and feel on par with the inspired dishes we’d find in any hip and trendy restaurant. But they also draw on Mediterranean culinary traditions, making them feel familiar, slightly careworn, and deeply comforting. — TheKitchn.com